The touch-paper has been lit - stand by for heavenly Jon Spencer Blues Explosion show, December 2010 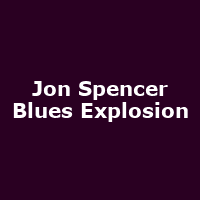 Possibly one of the loudest bands I've heard and purveyors of ferocious garage-blues is Jon Spencer Blues Explosion. Let's put it this way - the Jim Jones Revue are a decent representation of the volume and ferocity that Spencer's trio can deliver, although there is a decade or so difference in time-scale between their respective band-formations.

With a fevered bit of catalogue-raiding and subsequent reissuing going on this year, Jon Spencer feels that the time is right for a bit of UK action once again, this time choosing the curious yet increasingly eclectic venue Heaven in London in which to do it.

The date to remember is 2nd December and ticket prices cost Â£17.50 plus fees. There appears to be no other planned UK date, so this is a must for fans of the band.

The reissues include much of their output from 1991-2001 such as "Extra Width" (previously repressed by Mute in 2000), "Orange", the excellent "Acme" and a collection of Steve Albini and Wayne Kramer recordings originally issued as a self-titled compilation but now called "Year One". Oodles of extra tracks have been sourced by the Shout Factory label, making these a bit tasty.