King of the jungle blues hits the UK - C.W. Stoneking also to appear on Jools Holland this week 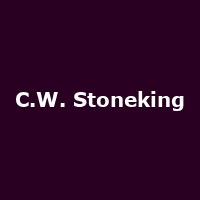 If you haven't heard the name C.W.Stoneking before, you probably soon will. The Australian blues singer-songwriter, who seems capable of charming the notes out of pretty much any style of guitar, has been busy putting his name (and unique style) about all over our radio-stations, including BBC Radio 4's Loose Ends (last month), Radio 2's Mark Lamarr (coming up on 8th October at midnight) and the big one, a TV slot on Later With Jools Holland tonight (Tuesday) at 10pm or during the full-length version shown on Friday night. He will be appearing with his Primitive Horn Orchestra, an ensemble that mixes up Afric-jazz, jungle and delta blues with a bit of theatre and one that will also be appearing with him on tour next year.

Armed with a variety of guitars and banjos, plus songs from his recently- reissued album of authentic swamp-roots, "Jungle Blues", Stoneking will begin his UK residency in Brighton on 25th January 2011 before hitting London, Leeds, Oxford and many more until Poole on 8th February. Tickets are available now priced at Â£8 - Â£12.50 plus fees.

If you want a taste of what to expect - imagine Big Bill Broonzy, Tom Waits and a New Orleans jazz-band in attendance - check out the video of the album's title-track. "Jungle Blues" is his second album, the first being 2006's "King Hokum".