Against Me! cancel 2010 UK and world tour 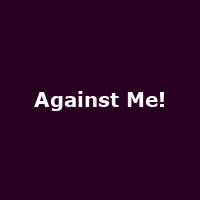 Against Me! have just announced the cancellation of their UK and world tour. The Floridians punk-rockers were due to hit these shores on 22nd October, accompanied by Fenix TX, F*cked Up, Japanese Voyeurs and Crazy Arm for selected dates, which would have culminated at Camden's Electric Ballroom on 3rd November.

Prior to hitting the UK, the band were scheduled to tour Australia and play a single date in Tokyo, but all dates are now cancelled. A notice on the band's myspace (www.myspace.com/againstme) reads:

Due to unforeseen circumstances Against Me! have had to cancel all upcoming tour dates in 2010. Refunds will be available at point of purchase, sincere apologies to our fans for any inconvenience this may have caused.