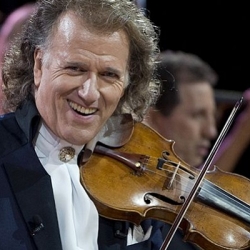 The renowned classical violinist Andre Rieu was due to tour the UK and Ireland during September but illness struck the king of the waltz down and prevented him from appearing, much to his (and your) disappointment.

The tour has now been rescheduled and the details are as follows with the postponed corresponding date in brackets. Andre will now play Newcastle on 19th April (replacing 30th September), London's O2 on 20th April (22nd Sep), Manchester on 21st April (29th Sep), Birmingham on 22nd April (23rd Sep), Dublin on 26th April (25th Sep) and finally Belfast on 27th April (27th Sep). Tickets are on sale now for the new concerts, priced from £45.80 upwards.

Pretty much all of his Australian tour was also affected by the disruptive lurgy (he will continue to Oz after the UK), so hopefully his exploration into the world of Strauss (with special guests) will continue unabated in 2011.