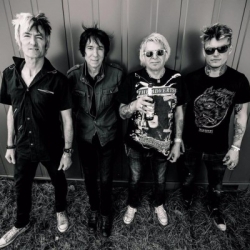 You learn something new everyday in music, or at least get reminded of something you read about several years ago. Swift detective work has revealed that each of the UK Subs' album titles start with the next incremental letter of the alphabet, so the first was the classic "Another Kind of Blues", the second "Brand New Age" etc. We're up to number 23, thus the new album is called "Work In Progress" and is due for release during October, just prior to a lengthy tour of the UK.

The Subs are one of the more intelligent fore-runners of the UK punk-scene and active since 1976, with Charlie Harper at the helm, giving his all on tracks such as "Warhead", "Stranglehold" and "Teenage", songs that still have a biting relevance today.

The first gig is all on its own in October, next Friday to be exact in Milton Keynes - tickets are £10 with a couple of support acts. The following dates take place during November and December, including nights in Manchester, Hertford, Brighton, a newly added night in Exeter and one final huge Christmas gig in London at the Relentless garage on 18th December. Again all tickets cost £10 (plus fees), except London which costs £12.50.