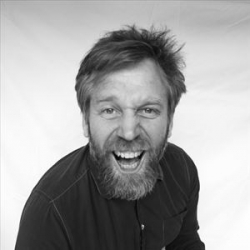 You may be aware of Oxjam, the musical and comedic events arm of the massive Oxfam charity. Throughout the year, the not-for-profit organization helps people around the country, well, organize fund-raising events ranging from straightforward gigs, festival and even raves (there's one coming up in Twickenham tomorrow night, according to the Oxjam website).

Talking of festivals, how about a comedy festival in North West London, eh? Yep, that's right - from Sunday 10th October, Kilburn will play host to four nights of laughter across three local venues, all hosted by comedian Jeff Leach and all in the name of 'fundraising'. Tickets for all the gigs cost just (calm yourself) Â£5. A bluey!

The first night (on the 10th) features the humorous antics of Tom Craine (ex Superclumps comedy team and winner of Best Comedy at the National Student Awards) and Laughing Horse semi-finalist Paul Sweeney.

Remember these nights are just Â£5 each and there are up to six comics per night. The final night promises a star-studded line up featuring TV presenter and 'Argumental' team-captain Rufus Hound, TV presenter and alopecia-battler (and winner) Gail Porter, wirey and scary Eric Lampaert and more.

If you need any more persuasion about supporting this vital cause, Gelato Mio will be unveiling their new Oxjam ice-creams and proffering free-samples throughout the evenings. Woop!