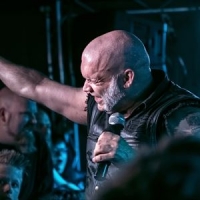 It's not often we feature one-off dates instead of tours on Allgigs, but this one looks 'a bit good'. Blaze Bayley's fiery rock-outfit may not have hit the heights of his next band, Iron Maiden, but they certainly left their mark with songs such as "Ezy" (a minor hit), "I Like It Hot", "Man Hunt" and "Smashed and Blind". And as for calling your debut album "Live Fast, Die Fast: Wicked Tales of Booze, Birds and Bad Language" and getting it produced by Def American head-honcho Rick Rubin, well you'd be forgiven for thinking these boys would be famous for many reasons.

Actually, the label lost patience after the second set "Down Fall the Good Guys" and they were dropped. Their sound got louder as typified by the Bronze-label live set "Massive Noise Injection", a sound that you can relive when Wolfsbane return with a concert in their own right in 2011.

They play London's Borderline on 9th April as a pre-cursor to further activity at festivals and other events throughout the year. Tickets have just gone on sale and cost £12.50 plus fees and are sure to be snapped up quick.

It isn't the first time the band have played since reforming last summer - they supported The Quireboys on their autumn 2009 tour - but it is their first headliner since the mid 90s (although they did play a 2007 Rock Of Ages Festival slot).