The Joseph, The Ben and The Dhani - grab a Fistful of Mercy at special London show, December 2010 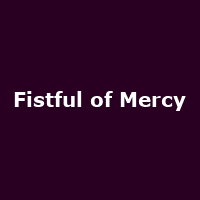 Those names above might not mean a great deal minus their surnames, but add in Arthur, Harper and Harrison and you have new super-group Fistful of Mercy, recently formed and raring to go.

The story goes that songwriter Joseph Arthur invited Ben Harper to work on some songs with him and Harper promptly asked Dhani Harrison to join them - et voila, Fistful Of Mercy.

Between the three of them, they have written an entire album relatively quickly with most of it sounding not unlike a hybrid of Thorns, Crowded House and, yes them again, Fleet Foxes. It's the harmonies that do it I think - see if you agree by checking out the video embedded just to the right (taken from a radio-show broadcast in the States).

Even if you are not overly familiar with the three of them as individuals, you soon will as a group. Ben Harper is possibly the most successful solo artist of the trio, having gathered a loyal following over the years with his crooner's vocal style. Singer Dhani Harrison should certainly look familiar - he is George Harrison's son! Joseph Arthur is also an accomplished singer-songwriter.

Apart from a welter of US dates, they are coming to London on 3rd December for ONE special gig. The chosen venue is KOKO and the tickets will go on sale tomorrow (1st Oct), priced at Â£23.50.

To give you a further taster of their talents, head over to their website (www.fistfulofmercy.com) for a free download, also entitled "Fistful of Mercy", taken from the forthcoming album "As I Call You Down".