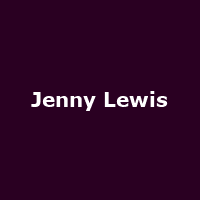 Since 1998, Jenny Lewis has been a vocalist in LA indie rock outfit Rilo Kiley, following a sometime career as a TV and film actress. She enjoyed minor roles in the William H Macy hit 'Pleasantville' and 'Talk To Me' and even starred alongside the great Lucille Bill in a short-lived-long-forgotten mid-eighties sitcom. She even appeared in Baywatch, and everyone remembers that.

Still only in her early thirties, Jenny has now stepped away from Rilo Kiley to team up with Scottish singer-songwriter and boyfriend Johnathan Rice to form, rather simply, Jenny and Johnny.

Jenny and Johnny first started working together in Los Angeles in 2005 although their debut record, 'I'm Having Fun Now', wasn't released until 2010. A strong creative collaboration developed and they both ended up playing on the other's recordings. Rice joined Rilo Kiley for the Rabbit Fur Coat world tour in 2006, and has played live with Lewis at every show of her solo career thus far. Jenny contributed writing and vocals to Johnathan's 'Further North' in 2007.

It was during hours of downtime on Lewis' Acid Tongue world tour that she and Johnny Rice began composing a collection of songs different from anything that either of them had previously created.

And it is the debut LP and this collection of innovative, fun pop that Jenny and Johnny are bringing to the UK for nine dates beginning in November. The tour opens at the Birmingham 02 Academy on Wednesday 24th November, closing a fortnight or so later on Friday 10th December at The Luminaire in London. In the interim, Jenny and Johnny play a host of atmospheric venues across the country including The Ruby Lounge, Manchester and Roadmender in Northampton. The final four dates are all in London, at different venues.