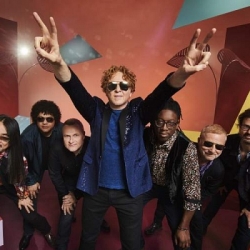 Last night saw the screening of 'Simply Red: For the Last Time', a live performance and documentary charting the rise and farewell dates for Mick Hucknall's Simply Red, hosted by former One Show host Christine Bleakley.

Selling over 50 million albums worldwide, Mick decided a while back that 25 years is enough and will call a halt to proceedings with his "final" farewell tour set to open in Dublin's O2 Arena on 7th November, before moving north to Belfast, then across the Irish channel and onto Nottingham, Glasgow, Manchester, Birmingham, Sheffield and finally London (for three dates).

Predictably, with Mick putting in yet another great live performance on the show last night, tickets have started flying, but there are some available for all dates, currently - not sure how long that will be the case though. Costing around £50 for Dublin and starting at around £40 for all other arenas - check below for availability.

Macy Gray has been announced as the support act for the tour and a new date has been added at Birmingham's NIA on 15th December. Tickets are on sale now, priced at £45 + fees.