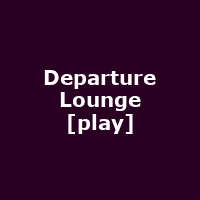 We've all been there - stuck at an airport due to strike action, volcanoes or the wings have fallen off. But delays are inevitable sometimes and normally down to ropey take-off or landing conditions. However, imagine that you're 18 years old and delayed on your way back to your home country from the sun - bummer, right? Not according to this new comedy musical by up and coming writer Dougal Irvine - in fact, quite the opposite.

Four teenagers, well versed in all things 'coming-of-age' (or so they think) are stranded temporarily at Malaga Airport after a hedonistic graduation celebration in the sunshine. Rather than let it bother them too much, they spend this free time to remember the good times, or the bad times depending on which character you listen to. Suddenly the group's friendships are strained as the secrets of the holiday are revealed.

"Departure Lounge" received many plaudits (and an award) at the Edinburgh Festival and New York Summer Play Festival and begins its London debut at the Waterloo East Theatre from 28th September - 31st October 2010, with the full run beginning on 1st October (previous dates are preview only). Tickets are available now, priced at Â£19 plus fees (concessions are Â£15).