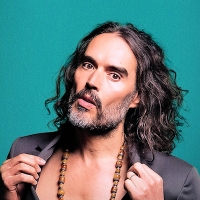 There's a whole generation of young people who do not realise that Russell Brand was once famous for being a stand-up comic. Since 2007's 'Booky Wook' had us reeling in the aisles with its hilarious title, Russell has been a busy man and has presumably collected more than enough material for a juicy follow up.

For a start, the 35-year-old seems to be ridiculously and joyously in love with US popster Katy Perry. He has appeared in numerous Hollywood films, usually as a boyfriend or a rock star, and sometimes both. He's stopped boasting about his allegedly prodigious reputation in the bedroom, especially since Ms Perry joined Team Brand (Brand Brand?). He even left Radio 2, supposedly long tail between skinny-jeaned legs, after some old fashioned tomfoolery got out of hand.

But not so he could kick about with Katy Perry, drawing lovehearts and snuggling. No, Russell's been busier than ever. A remake of late-eighties Rik Mayall vehicle Drop Dead Fred beckons and there's even a suggestion Russell's soon to appear in a remake of 1981's Arthur, in the Dudley Moore role. Which brings us back to comedy, something Dudley Moore did quite, quite brilliantly and that Russell Brand used to do quite well. Maybe he still does.

It is with no little irony then that Brand is now returning to the UK stage to promote his new book; Booky Wook 2. It's even the Booky Wook 2 Tour. And looky look who's with him on the opening night: one Jonathan Ross, his partner in crime from Andrews Sachs v Radio 2 (2008).

The new show has elements of 'an audience with...' - Brand will do some stand-up and be interviewed (by Ross for the Hackney date) and there'll be an audience Q&A session. It will all be very entertaining no doubt, and much of it will be improvised even if Brand can prepare in advance his answers to: 'How many women have you slept with?' and 'Didn't you used to be funny?'

Russell Brand probably still is funny. There's only one way to find out - get the DVD at Christmas. But if you can't wait that long and you can get to Edinburgh, Manchester, Bristol or Birmingham (London's sold out), then why not go along and ask him yourself.