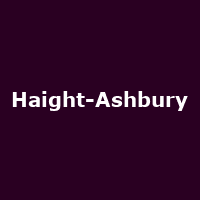 Naming yourselves after a district or country, normally demands that you represent the mood and atmosphere of said location with your music. OK, it didn't work with the 808 State spin-off, Switzerland, but you get my drift. Here we have a band called Haight-Ashbury, named after a district in San Francisco which sort of points you towards what this rather fine trio sound like. Um, except they come from Scotland.

Pitching somewhere around the fuzz-guitar of fellow Scots Teenage Fanclub and the West Coast sound of The Byrds, topped off with The Tambourines, Haight-Ashbury swap gruff vocals for angelic sweet melodies. Remember how honeyed Throwing Muses or the Deal sisters in The Pixies used to sound? Jennifer and Kirsty Ashbury are not too far away from that magic. Key songs have included the excellent epic "Freeman Town" and spikier "Favourite Song" and any band that cites Neil Young ("Harvest"-era) as an influence has to be worth investigating.

You'll get a chance to do this when they embark on a UK tour during November that takes in York, London and Manchester and more. Tickets are now available at around Â£6 plus fees, which basically equals 'money well spent'. Check their songs on their My Space page (www.myspace.com/haightashburyuk) you'll come over all Californian [sounds messy - Ed] if you do.