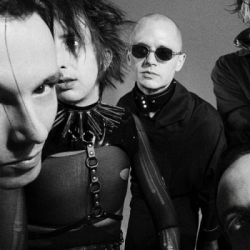 He scared the living daylights out of MTV programmers back in the 90s with his iconic and disturbing video-work with Aphex Twin - "Windowlicker" and "Come To Daddy", but they came round eventually, especially after "Windowlicker" earned a BRIT nomination in 2000. Other works include the really quite amazing "All Is Full Of Love" (Bjork) and "Frozen" (Madonna).

Nowadays Cunningham mixes his busy time with adverts (remember the scary wide-faced girl on the Playstation ads a few years back?), short films and photography as well as the occasional music-promo such as The Horrors' "Sheena is a Pirate" in 2008.

This year, Cunningham has been working on a completely new untitled audio-visual show, with live performances selling out pretty damn quickly. The Royal Festival Hall date in the spring sold out - so just how ARE you going to witness this incredible new stuff? I'll tell you - Chris Cunningham has announced a return to the Roundhouse in February 2011 and tickets are now available priced at £25 plus fees.

And just to remind you just how the marriage of video and the scary Twin is matched up by Cunningham, peek at the classic we've embedded just up thereit's not for the faint-hearted