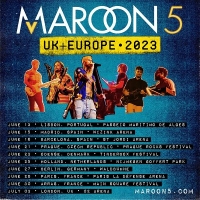 Can Maroon 5 make it three number one albums in a row with their newie? Fame's fickle finger of fate may well raise itself with a resounding 'no', but bear in mind it's only three years since the release of "It Won't Be Soon Before Long" and not everybody has bought into the wave of ringtone soul and X-Factor detritus.

Wholesome radio-pop might not set the world alight, but Maroon 5 were absolutely massive just 6 years ago with the global hit "This Love", its follow-up "She Will Be Loved" and the platinum-selling "Songs About Jane". We shall see.

The new album is called "Hands All Over" and will be released on 20th September, with two singles already released a while back (the most recent being "Give A Little More"). To support the imminent new set, a UK tour has been announced which strategically covers most of their fan-base over here, starting in Bristol on 16th Feb and continuing on to Brixton, Birmingham, Manchester and finally Glasgow. Tickets go on sale Friday 17th September.

If you are a true fan of the band, you might like to know there is a limited edition of the CD that costs (cough, seizure) $199 from the US arm of their website - I'd stick to the tickets if I was you!