Rodgers and Hammerstein's Me and Juliet for intimate London premiere, October 2010 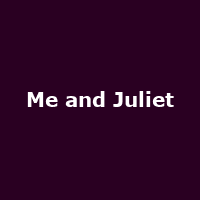 Fast becoming a major London venue in theatre-land, West Brompton's Finborough Theatre appears to have struck gold once again with another premiere production of a Rodgers and Hammerstein musical. The duo's "State Fair" played here prior to its run in the West End and its director, Thom Southerland has taken up the creative reins again with this lesser-known musical-production "Me and Juliet".

Set to run from 5th - 30th October, the story concerns the secret marriage of a singer (Jeanie) to her stage manager (Larry). However, the lighting engineer (Bob) on the same production just happens to be Jeanie's ex-boyfriend - and he is not too enamoured about the whole situation. As the curtain raises, anarchy and chaos ensues amidst the jealousy and passions displayed and the situation soon becomes highly comical.

The musical originally played on Broadway during the 50s for just one year, before being consigned to the archive - until now. This production heralds its European premiere as well as the 50th anniversary of Hammerstein's death.

Initial ticket prices for the first week or so cost Â£9 for standard adult tickets (concessions for under-30s with ID are just Â£5!). Prices begin to rise from the second week, but even these are only Â£11 full price (no concessions). Go on - get some romantic song and dance into your life, the Finborough certainly seems to hit the right spot more often than not, these days.