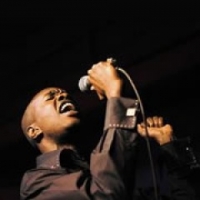 Velvet-tonsils David McAlmont must like London, big time. His tour diary is full of dates of varying sizes in a mixture of locations across the capital, featuring a pair of intimate shows in Bethnal Green and a collaborative concert with Michael Nyman.

His most recent album, "The Glare", was recorded last year with Nyman and will form much of the set-lists for these upcoming shows, along with far earlier material stretching back to the successful 90s era with Bernard Butler, even perhaps his excellent debut material with Thieves. The man certainly has got an incredible voice with a scary range!

McAlmont will then join Nyman's band at the Barbican on 17th October for a show centred around the 'Ny-man With A Movie Camera' project, based on the 20s Russian documentary by Vertov. Tickets are still available at Â£25.

Finally, he returns to rather more intimate surroundings at the Leicester Square Theatre on 22nd November to present another show featuring his back catalogue (plus any requests you may have) - tickets are Â£20 plus fees.