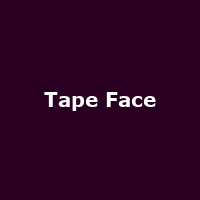 When I was a kid, around the time that celluloid film was discovered, I used to enjoy Charlie Chaplin and Buster Keaton re-runs on TV - there wasn't much to do in the summer holidays when it rained, but at least you could have a laugh in the mornings, rather than watch two plonkers in cardigans nosing around people's houses.

I imagine that New Zealander Sam Wills was also glued to his telly / DVD -player at some point - his award-winning creation The Boy With Tape On His Face includes many references to the heroes of the silent-movie world, throughout the routine. The show is predominantly silent with Wills employing deft touches of magic, illusion, comic-slapstickery and expressive audience-participation.

If you went to this year's Edinburgh Fringe, you may well have witnessed a sell-out show of his, as well as learning of his nomination for the 2010 Fosters Edinburgh Comedy Award nomination - if you didn't, you should certainly check out his freshly-announced (or should that be 'mimed'?) tour. Starting in Stockton on 10th September, the tour pretty much stays in the northern half of the country, including two nights in Birmingham (4th/5th October), before heading to the capital for three nights at the Soho Theatre (21st - 23rd October). He will then head north for the remainder of the jaunt until 1st December's gig in Glasgow.