All that Jazza - Robert Wyatt ties in album launch with humanitarian event at Scala, October 2010 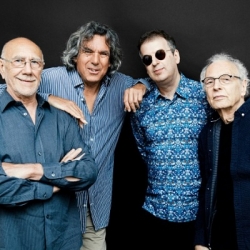 Since the demise of Soft Machine, Robert Wyatt's solo career has taken many twists and turns and is about to take another with the announcement of a two-night residency at London's Scala. The reason for this auspicious occasion is two-fold - his new album will be launched at the events and will also be used to raise awareness for the Free Palestine Movement, under the banner Jazza Music Festival.

The album is entitled "For the Ghosts Within" and sees the light of day on 11th October via Domino. The songs obviously feature Robert Wyatt in usual fine fettle, but this time he is accompanied by previous and new collaborators such as jazz/soul vocalist Cleveland Watkiss plus musicians Gilad Atzmon (with his Orient House Ensemble) and Ros Stephens.

Wyatt plans to launch the album at the Scala's Jazza Festival 2010 on 12th / 13th October, with the above musicians, as well as other like-minded artists including the sibling The Unthanks, Palestine's hip-hop maestro Shathayah, singer-songwriter Rory Mcleod and a special ensemble called the Jazza All-Stars (featuring a selection of the above mentioned artists, plus nu-jazz drummer Seb Rochford).

Tickets for the evenings cost £20 - the final temptation being the announcement of very special guests on the night - and it's for a good humanitarian and non-political cause.