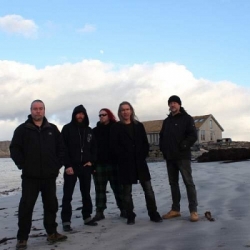 For those of you old enough to remember being a teenager, owning a leather jacket and painting a band's name on the back and certainly not the owner of a comb or an electric iron, then New Model Army was a likely trio of words to have been emblazoned across your back. I didn't have a leather jacket (I was a veggie), so I was content to sew a logoed patch onto the arse of my leg-suffocating black jeans instead. Ah, the heady days of supporting your bands like football teams.

NMA still stand out as one of the 'Top 10 Gigs I've Been Too' (it's not an official award, of course), not that I realised at the time when sat on top of a speaker stack, headbanging like a fitting pigeon at a ropey club called Woods in Plymouth in the 80s. If you like Frank Turner, Levellers and a bit of fist-pumping rock and folk style, you have to see them.

So, 30 years after New Model Army first picked up their instruments and carved out spiky, punky and generally pissed-off anthems such as "Betcha", "Great Expectations" and "Small Town England", the boys have announced three double-date spectaculars over the next few months. The chosen towns are Nottingham, Dublin and London and the premise is this: Two nights in one town, each night a completely different playlist beginning with a 45-minute acoustic set, a break and then an electric set featuring at least 4 songs from each of their 13 albums! The band are on early at most of the venues in order to cram it all in!