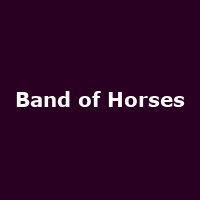 Band of Horses' brand of catchy alt-country (sorry - 'low-country') rock has won an army of followers since their 2006 debut record 'Everything All The Time'. Originally formed by Ben Bridwell in Seattle, Band of Horses are now based in the lead singer's home state, South Carolina. Their maturing sound bears the careworn hallmarks of their story so far - a wise, poppy, occasionally grunge-tinged, much-travelled southern rock. With beards.

Four years and two albums on from that commercially inauspicious 2006 start, Bridwell's band are bringing the latest record, May 2010's 'Infinite Arms', to the UK and Europe in early 2011. The third LP has been by far the most successful in terms of sales and its release was soon followed by acclaimed debut appearances at last weekend's Leeds and Reading festivals.

The seven UK dates promise to cap a fine 12 months for the band as Leeds and Reading followed a tour support slot for legendary Seattle rockers Pearl Jam and, in the forthcoming months, their own US autumn tour.

The UK tour begins in Newcastle on 26th January, before heading to Glasgow, Birmingham, Bristol and Leeds. The tour closes in some style with a date at the Manchester Academy on 1st February and then onto London's O2 Academy Brixton on 3rd February.

So, dig out that slim-fit lumberjack's shirt, stop shaving and warm up that refresh button - tickets go on sale this Friday, 3rd September at 9AM, priced at £16.50 regionally, £18.50 for London. They are likely to sell out very quickly.