Covers bands with plenty of Substance and Murder on their minds? re:order and The Smiths Indeed 2010 tours 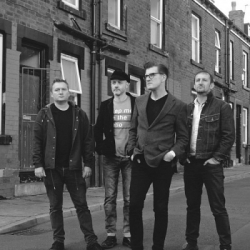 We don't often write about covers-bands - there's nothing wrong with them, provided they stick to the point with the name, the look and above all, the interpretations of the chosen band's classics. It is the highest form of flattery and in the case of the two acts here, it really will get you everywhere.

I first saw re:order at a Factory concert-evening in Brussels last year (although the vat of beer I'd consumed meant that I missed a few tunes queuing for the loo - plus they were on at 1am). But they were scary - scary as in 'realistic' and 'accurate'. I vowed to catch them 'live' again and now I can - Re-Order are coming to London in September as part of a trio of recently-announced gigs.

The first date is at The Dublin Castle, a fitting location since it has spawned plenty of upcoming bands who no doubt have a few Joy Division and New Order songs on their collective iPods and stereos. Re-Order will play there on 30th September and tickets are available now, priced at just £7 plus fees (proceeds will go to Great Ormond Street Hospital).

The support on this night is provided by Vile Electrodes (local synth-pop trio) but, for the next two nights, Wolverhampton (20th November) and Manchester (25th Feb 2011), the support will be provided by The Smyths who probably need little introduction as to who they play tribute to.

If you need any persuading with regards to seeing re:order, Peter Hook has given them his seal of approval, stating that "they were uncannily accurate" - they get mine as well.

Talking of influential and important legacies, we draw your attention to The Smiths Indeed, who obviously specialise in Morrissey's finest hours in the 80s. These chaps will embark on a "Meat is Murder 25th anniversary" tribute tour starting in November in Basingstoke on the 5th and continuing to Croydon, Worthing, Shepherd's Bush and many more until finishing fittingly in Manchester on 22nd December.

For around £17.50, you will get the whole album in full plus a raft of Smiths classics. Time to sow those gladioli and daffodil flowers now, methinks.