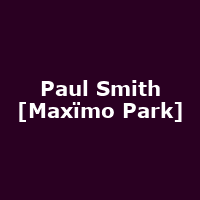 With his trademark bowler hat and surreal lyrical-leanings, it seems Paul Smith is taking a short vacation from his 'babies', Maximo Park, and kicking it in the land of solo indie-singers. First Kele, then Fran and now Paul - it must be the weather or something in the water. Actually, it means even more exciting new music for fans of those bands and Smithers has not disappointed.

His debut solo album gets a release later this year, entitled "Margins", with a single called "Our Lady of Lourdes" hitting the shops and servers on 1st November. There is also a track to download on his website www.paulsmithmusic.eu called "North Atlantic Drift" - it's pretty damned good as well.

Oh and there's a tour coming as well - does it get any better? The shows begin in Nottingham on 26th November and continue to Leeds, Birmingham, Bristol, London, Glasgow and finally Gateshead. Tickets are Â£10 for all dates except Bush Hall in London and The Sage in Gateshead and three nights are already on sale - London, Leeds and Bristol, with the remainder on sale tomorrow morning at 9am. Understandably, tickets will fly out and the gigs will be rammed.