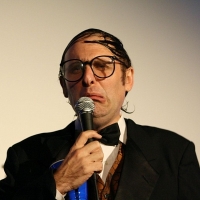 His character may look like the person to avoid on the bus, but comedian Gregg Turkington's self-proclaimed "world's worst comedian", Neil Hamburger continues with a successful run of gigs at London's Soho Theatre until, and including, Saturday 28th August.

Billed as an 'anti-comedian' (think Andy Kaufman but more abrasive and a far bigger 'loser'), Hamburger has a style that mixes reckless black-wit (normally aimed at hapless celebrities), dour yet direct one-liners and truly shocking puns. As in below-the-belt or crossing-the-line kind of 'shocking'. Occasionally though, the gags are shockingly bad which means that you have an act you can shake your head at AND laugh at/with. The routine is delivered in the style of a failed schlock-lounge comic, down on his luck yet blindly and bitterly determined to soldier on. If he looks familiar to a few of you, he appeared with Bonnie 'Prince' Billy during a promo campaign for the album "The Letting Go".

Tickets are still available for the remaining four evenings, priced at £12.50 - £15. As a flavour of his vapid delivery-style, one of his mid-August 'tweets' began with the question, "Any Motley Crue fans out there. I snapped a picture of their drummer backstage", followed by a 'twitpic' of a dead trapped rat in a shower. You see? You want to go now don't you?