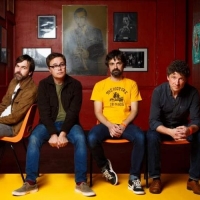 The Bluetones escaped from the beautiful ramparts of West London suburb Hounslow some years back, scoring hit after hit after hit with "Slight Return", "Marblehead Johnson" and "Cut Some Rug" in the mid-90s. Their earnest jingle-jangle earned them many plaudits, not least for the recently-reissued "Expecting To Fly" debut album.

Nowadays, the lads have a new album called "A New Athens" which got a release in May and, despite not hitting the heights of its predecessors, sounded pretty good. You'll be delighted to know that The Bluetones will play a short burst of dates in the winter, beginning with Huddersfield on 24th November, Manchester (26th), Gloucester (7th Dec), Leicester (8th) and finally Norwich (12th). I have a feeling they will fill those spare inbetween-days with more venues, but for now you feast your eyes and ears on these. All tickets are on sale this Friday priced at £13, except for the FAC 251 gig in Manchester which you can buy for the same price right now.

In addition to all of this malarkey, lead singer Mark Morris will be spinning some indie classics at 'our local', The Dirty South in Lee, South London [nearest train stations: Lewisham or Hither Green - Ed]. This DJ set on 25th September gives fans a chance to hear new and old Bluetones tracks, as well as a few by their then rivals. There will be a brace of bands playing and all for £10. You might miss the last train home though - it finishes at 2am.