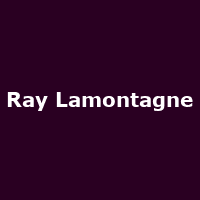 One of my favourite singer/ songwriters of the new millennium has to be Ray Lamontagne, whose re-issued, slow-burning debut album 'Trouble' eventually got the plaudits and commercial success it deserved, helped by the inclusion of the plaintive album track 'All the Wild Horses' on the American drama 'Rescue Me' back in 2004.

But that's history. Now Mr Lamontagne, backed by new-ish band "the Pariah Dogs", will release their latest opus 'God Willin' and the Creek Don't Rise' on 6th September. It's the first self-produced album, meaning that drummer and producer of the previous three efforts - Ethan Johns - doesn't make the cut this time, which is a shame as far as I'm concerned, being a bit of a fan of his.

Having said that, the freebie track 'For the Summer' [check the sidebar 'For the Summer [Free Download]' link - Ed], is pretty damn fine. A slight departure from the sound of 'Gossip in the Grain', with the band seemingly playing a bigger role - I've played it back-to-back around eight times already since downloading an hour ago... must be time for the ninth spin, methinks.

So, who are 'the Pariah Dogs'? The 'new' band consists of Ray's previous touring bassist Jennifer Condo and guitarist Eric Heywood plus drummer Jay Bellerose and Greg Leisz on pedal steel - who I think was on the 2006 'Til the Sun Turns Black' tour, but I could be wrong.

To grab the download, you'll need to be an Amazon customer - if you're not, it's pretty easy to set-up. The free download is only available for a limited time - until the day of the album release - 6th September. Click on the 'For the Summer [Free Download]' link in the sidebar, add the track to your cart, then checkout and agree to pay 0 pounds and 0 pence. You can opt to install the Amazon MP3 player (I opted not to), then the download should commence.

We'll have a review of the album posted shortly before its release... watch this space. You can pre-order the 10 track album on iTunes and Amazon, and Amazon also have a vinyl version available (yum!) for the princely sum of Â£28 (yuck!). Or, you can pop along to Ray's official Sony online store (www.sonymusicdigital.com/ray-lamontagne/features/5593030) and pay $30 for the same piece of vinyl (around Â£19), which appears to include UK shipping. The Sony store also has a few limited edition copies up for grabs.