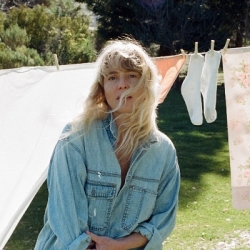 I'm wondering what inspired that fizzy mixer-drink advert with the big cat in it - perhaps the marketing dept heard of Lissie's feline-flavoured album, "Catching a Tiger"? Whatever, the album cracked the Top 30 over here, although the various singles haven't done a bundle as yet. Her album will get a release in the US this week and, to celebrate this fact, another single called "Cuckoo" will get a release next week, complete with a Lady Gaga cover ("Bad Romance").

Lissie is already confirmed for a UK tour with The Script - the jolly pop-rockers will sweep the country during September with our girl merrily trilling away in support [face value tickets now all sold-out - Ed]. Good slot I reckon but even better news for her fans - yep, as well as a short UK and Ireland tour in October and November (including a now sold-out date at London's Heaven). I'm thinking that with that much time spent in the UK, she'll practically be a resident by the end of the year.

The second wave kicks-off in Dublin at the Academy on the 7th December (where she's also playing next month) and continues to Glasgow (8th), Newcastle (10th) and continues to many more destinations until Brighton on the 19th. Prices cost £12.50 plus fees - please note, there is a London date at the Shepherd's Bush Empire on 13th Dec priced at £15. Tickets for all but the Dublin date go on sale this Friday at 9AM, tickets for the Dublin Academy gig go on sale tomorrow morning (Weds 25th August) at 9AM. Get in quick, the adoration-wagon is gathering pace!