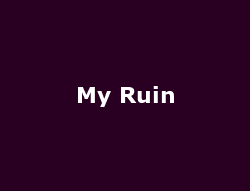 Last week, American hard rockers My Ruin announced the cancellation of their 2010 European tour, including a date at the Islington Academy, planned for 24th September.

The new date has just been announced, and it's the rock-friendly Underworld in Camden on 11th March 2011. Tickets remain valid, so if you have some, there's no need for you to obtain a refund, unless the new date is not convenient. For those who've yet to buy a ticket, they're on sale now, priced at Â£12 + fees.