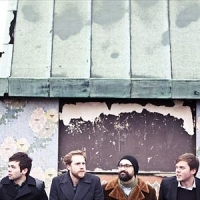 4AD were certainly onto a winner signing this lot - they ended up with one of my favourite albums of 2009, "Until The Earth Begins To Part". A rousing, soaring and melancholic mixture of fiercely passionate rock 'n' folk given a brass topping here and there, proved to be a winning combination and the band has gained a reputation for their explosive 'live' shows.

According to the label's website, the forthcoming second album started life in songwriter Jamie Sutherland's kitchen, although I'm not sure if he got inspiration from knocking up a curry or creating a rosemary and red wine reduction. Either way, you can sample a track entitled "A Leaving Song" by visiting www.4ad.com - free downloads, good idea.

The album won't be free though and will get a physical release on 25th October and will have a fetching sleeve designed by the masterful Vaughan Oliver at V23. Oh, and it's called "Let Me Come Home" and will be preceded by a single on 18th October, "A Darkness Rises Up".

The band is set to play a few gigs far and wide, starting in their home city at the Edge Festival on the 28th August, followed by an appearance at the Guinness Arthur's Day in Dublin on 23rd September (venue tbc) and a special London date at the Hoxton Bar and Kitchen five days later on the 28th. Tickets for the latter cost just Â£8.50 plus fees, a bargain price for such a top act. I think I'll certainly make the effort - see you there.