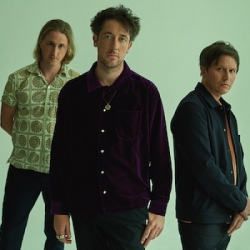 Furry Australian marsupials or zany indie band mainly from Liverpool - you decide. While you're 'umming' and 'ahhing' over that one, you'll be pleased to know that both will be touring their home countries during the autumn although it'll be a damn sight easier to watch the band than catch a glimpse of the furry variety.

The Wombats (the band) will actually be playing in Oz during the early part of October before heading back to the UK for a new-album-supporting type of tour commencing on 19th October in Southampton and continuing as far as their hometown, Liverpool on the 29th. Tickets went on sale this morning and cost around £13-£14 and there is a confirmed London date in amongst the rota at Heaven on 26th October.

The aforementioned second album will appear around the same time and is, as yet, untitled. We do have the title for the first single to be taken from the album - it's "Tokyo (Vampires and Wolves)" (no we have no idea why, either) and it will appear as a CD and two 7" formats on 27th September.