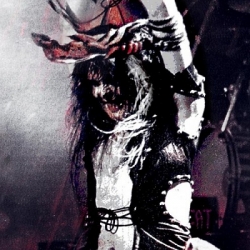 Blackie Lawless might not be the sort of bloke you'd trust with your laundry, but he can still rock and roll with the best of them. And with songs such as "F**k Like A Beast", it's unlikely you'd ask him to mind the house whilst you're on your holidays - mind you, you wouldn't get any cold-callers flogging energy or religious ephemera either.

W.A.S.P. is definitely a band that gets under your skin (especially when their My Space page loads up - full ear-splitting volume from the drop down video for the single, "Babylon's Burning" - thanks guys) [yes, I can vouch for that - having just jumped a few feet out of my seat - check the video on the right - Ed]. Who remembers their charming album titles like "The Headless Children" and "Kill F**k Die"? Which kind of makes the new album title, "Babylon", seem tame by comparison - the music certainly isn't though and their popularity certainly showed no sign of waning after it reached #15 on the UK album chart.

The rockers are up to their 'live' tricks again with a set of UK dates in the autumn, starting with Nottingham (20th November), Manchester (24th) and Dudley on the 26th, with tickets on sale now at around £16.50 plus fees. I imagine more dates will get added soon - keep checking this page for more additions.

The band are still playing a date in the West Midlands, but the gig for 26th has been moved from JB's in Dudley to the Wulfrun Hall in Wolverhampton.