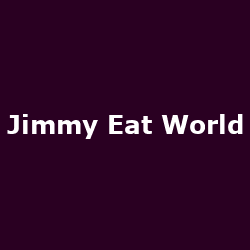 It's been three full years since the last album appeared from the perky pop-punk quartet Jimmy Eat World, but 2010 heralds the return of the acclaimed outfit with the announcement of a full European tour in support of their seventh new album, due out in the autumn. The band hasn't played in the UK for some time so tickets will be snapped up pretty quick when they go on sale on Friday at 9am.

The tour starts in Norwich on 13th November and continues to Bristol (14th), Belfast (15th) and several more before ending up in London at the Brixton Academy on the 23rd. Tickets cost £16.50 - £18.50 plus additions.

The new album will be entitled "Invented" and will hit the streets on 28th September with a single, "My Best Theory", available digitally right now. The album has been produced by previous collaborator Mark Trombino and has been worked on for the past two years - a deluxe version with four extra tracks is available on pre-orders.