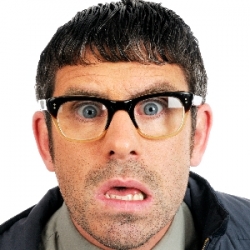 "I've got a loada concerts comin' up right? And I'd love you lot to turn up, that's if you can be bovvered. Thing is, I don't wanna leave the burger van unattended in case it gets fire-bombed and stuff and I don't wanna open up with a char-grilled salad bar and a sticky air-filter. Plus all me selection of flavoured milks will get pretty rank - anyway, I rotate me stock on a regular basis, every month with a 'D' in it and banana-flavour is a bugger to shift at the best of times". You can almost hear him say it.....

Renton Skinner's eccentric, bespectacled and burger-van owning alter-ego Angelos has proved to be an instant hit as the score-keeper (yeah, right) on Vic and Bob's "Shooting Stars", surpassing the heights that George Dawes reached whilst wearing a big nappy. "What's in your bag, Angelos?" is sure to become a catchphrase for a generation, but for now the character chases Ulrika-ka-ka-ka-ka for her affections in vain. That's when he's not playing gigs of course.

Next month, he appears with Reginald D Hunter at the Greenwich Comedy Festival (10th Sep - tickets still available at £18.50) and then takes a short break before headlining a series of comedy 'Xmas Events' and which will involve special guests, comedy songs and magic. So far the dates include Hull on 5th December, London's Bloomsbury (7th) and the HMV Institute in Birmingham (8th - oh yes, we'll be doing a round-up of this venue pretty soon). Tickets are available and cost £5 for Hull, £18.50 for Bloomsbury and £15 for Birmingham (plus the usual fees).

Meanwhile, the BBC have installed a webcam in Angelos' flat - you can watch it by logging onto their comedy blog pages at www.bbc.com . In his own words "Press the Feedback button to watch - and leave a comment of your own, although be warned: I may actually get back to you".