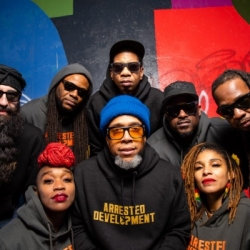 Back in the early 90s, if you were into hip-hop you were divided between crotch-grabbing thug-swaggering gangsta-rap or you were into the beats, the conscious lyrics and the generally easy-going nature of roots-rapping courtesy of A Tribe Called Quest, De La Soul and Arrested Development. The latter came up with three Afric-influenced soul-rap hits in 1992/93 with "People Everyday", "Mr Wendal" and "Tennessee" and looked impenetrable for years to come.

Their debut album "3 Years, 5 Months and 2 Days In The Life Of..." seemed to be in every customer's mitt during my time at Our Price in those days - unfortunately the follow-up "Zingalamaduni" wasn't, and I remember sending most of them back to EMI at some point.

Still, that second album was OK in places and now the band has just recently released a new album, their first in five years. Entitled "Strong", it features the usual high-standard of right-on ethical hip-hop and has strengthened (no pun intended) their market in Japan - they're pretty big out there. The album is available via the usual online outlets.

You can catch Speech and the crew on tour during October with dates in London on the 13th, Birmingham (14th), Exeter (15th) and many more until Leeds on the 21st. Tickets are available now priced at £15.