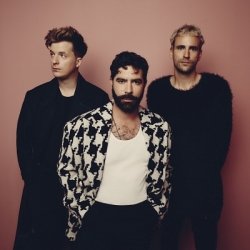 This is a bit of a stop-press special - Foals are to preview their upcoming Leeds / Reading / Electric Picnic appearances with a very special appearance at the intimate Dingwalls venue in Camden Lock on 25th August. It is part of the MTV Underage show-series which means you MUST be between 14 and 18 years of age with ID to gain entry at the door (and obviously at the bar).

Tickets are flying out fast and cost £10 plus small fee - a bargain. The support act will be Trophy Wife and the show begins at 7.30pm. Foals certainly seemed to be upping their game in response to the Mercury nomination earlier this year.

The band have also announced the full physical release of the live favourite "Spanish Sahara" on 13th September, with a brand-new version recorded with the London Contemporary Orchestra and wizard producer Alan Moulder. A review of said single will appear here soon.