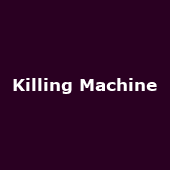 So, this makes it a double-whammy for UK metal fans: Killing Machine have cancelled their September 2010 UK tour.

This is a bit of an odd one, firstly, as neither the band's official website or myspace has any mention of the cancellation (granted, it no longer has the dates listed), but because the information has to come from the support act for the tour - Norway's Gaia Epicus - I hope they got a fee for writing this press release:

We are sorry to say that the planned UK Tour to support Killing Machine is canceled/postponed. Killing Machine had to cancel the upcoming UK tour because of their bass player leaving the band. Gaia Epicus was really looking forward to go back to the UK and play. We are now working hard on either getting new dates for the tour with Killing Machine or putting up a new tour of our own. We hope to have new dates for you very soon.

It gets even stranger, as the tour was due to start in London on 16th September, ending in Bristol on 26th September - nothing strange about that you say? No, but they are still heading to Europe for a wee tour starting just six days later on 1st October - and they are also playing a festival in France tomorrow. Ho hum.

Anyway, if you have tickets, you should speak to you point of purchase to obtain a refund.