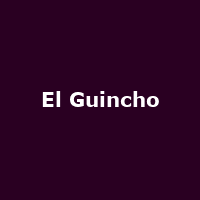 You may not know the name El Guincho just yet, but you soon might. Pablo Diaz-Reixa has been using the moniker since 2007 in order to release a very curious yet engaging catalogue of, well, just about every musical style you can think of. Fusing Spanish roots and tongue with strong elements of African, Asian and Caribbean, mixed up in a big casserole of global beats and looped to buggery might sound like a right old mess but, trust me, he hasn't put a timbale wrong yet. The album "Alegranza" caused a few people to sit up and take notice - think Os Mutantes, Manu Chao on acid and Speed Caravan territory.

Tell you what - go to his website at www.elguincho.com and check out the free download of the single, "Bombay". If your feet don't wiggle and your neck doesn't nod just a little, you are officially dead - it's a neat melange of steel pans and a brimful of Asia that serves as a great amuse-bouche for the upcoming album, "Pop Negro", due out in September. It's also insanely catchy without being trite.

The young Canaries musician is back in the UK to promote the album, playing six gigs from 28th October (Manchester) to 9th November (Brighton) with a stop-off in London on the 7th. Tickets are on sale now and cost a pocket-friendly Â£7.50 (Â£9.50 for London) plus fees to get in. Meanwhile, I'm going to put "Bombay" on again for the fifth time in half an hour - I bet the neighbours are loving me right now.