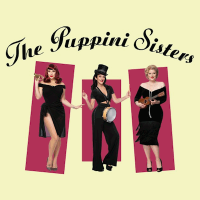 Three ladies straight out of Trinity College (via Italy and London) and definitely NOT sisters - well, they are but only in namesake - have made a real name for themselves as a 40s revivalist harmony group, laced with a chunk of rock n roll to boot. Yes, The Puppini Sisters burst onto the scene in 2006 with the single "Boogie Woogie Bugle Boy", a homage and cover of an Andrew Sisters song. The Andrews are a major influence on the girls, hence the 'sisters' moniker, as well as a raft of contemporary pop songs such as Beyonce's "Crazy in Love" and Dusty's "Spooky".

The girls will return for more Christmas shows at London's Pigalle Club on the 7th, 9th, 10th and 11th December (they played a similar number for Christmas last year) and there are tickets beyond just watching. Standard tickets cost Â£20 plus fees, but for Â£55 you can include a full dinner to have before the party goes with a swing. Tickets for all four nights are available now. Tuck in!