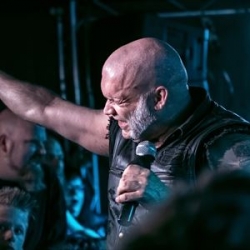 Old rockers never die - they just keep on rockin', except that Blaze Bayley isn't that old at all, he's just been hanging around the experienced line-ups of Wolfsbane and Iron Maiden, before forming his own band, also called Blaze Bayley, in the late 90s. Still going strong, Bayley himself began life in Wolfsbane in 1984, a credible hard-rock outfit who disbanded after Bayley was selected by Iron Maiden to join them after the departure of the legendary Bruce Dickinson in '94. He appeared on three albums including the ironically-titled "X Factor" in 1995.

Since 2000, Bayley and his band have released a handful of albums, including this year's "Promise and Terror" an eleven-song set that features "Surrounded by Sadness", a paean to his late wife.

It's an album of good old honest heavy-metal and requires a full tour to reveal its true sound, so why not start in September in Rushden - seems as good a place as any and it's on the 4th. Other stops include Grimsby, Sheffield, Glasgow until a short break then a return to London on 28th October. They also play a Christmas gig in the Midlands on 18th Dec at JB's in Dudley. Tickets cost around £5 at most venues (plus fees).