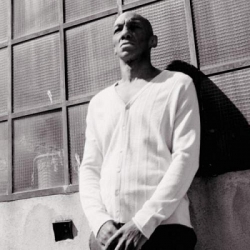 He might be living in Paris at the moment but Bristol's Tricky hasn't lost sight of his roots and heritage, as revealed by his last album's title, "Knowle West Boy", named after the tough neighbourhood where he grew up. Tough it may have been, but Tricky's music isn't all about gangsters and players, it's about his culture and his mixed heritage. On the Domino Records website, he gives his reasons for the new album being called "Mixed Race" as simply down to him "coming from both worlds".

As well as the new album and single (see below), he has announced an exclusive London date at the city's KOKO venue on 22nd October - tickets go on sale on Friday at 9am. Hurry because demand will be high and, as yet, no tour has been announced.

New single "Murder Weapon" is the first taste of this up-tempo, yet still gritty and thought-provoking set of tunes and gets a release on 30th August, with the album appearing later in September. We've snuck a little 30-second teaser for you to watch (blink and you'll miss it) to highlight the mood of "Murder Weapon", a piece (no pun intended) that opens out into a relentless version of Echo Minott's dancehall classic from the early 90s. It's a banger and you can check the full song via "Tricky - Murder Weapon" link in the sidebar to the right.