When will we see them again? 2011, actually - The Three Degrees bring some soul to UK towns and cities 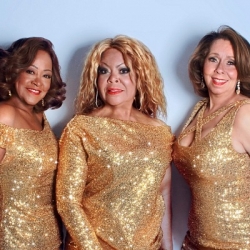 I imagine many people will struggle to pinpoint who or what The Three Degrees were, or rather, are. They were a massively successful act during the 70s, racking up half-a-dozen big hits between 1974 and 1979, as well as actually proving their worth with a couple of triumphant albums to boot. Soul singers were two-a-penny in those days, but there were not a huge amount of all-female acts at that time (the Supremes being the last similar group of any note). The current line-up is also testimony to how long the band were formed, prior to their heyday - Helen Scott joined in 1964 and rejoined in 1976, up until the current period.

If soul-groups are your thing and songs like "When Will I See You Again" (their signature tune), "Year of Decision", "Take Good Care Of Yourself", "The Runner" and "My Simple Heart" bring a lump to the throat and a shuffle to your feet, then you might like to know about their extensive 2011 tour!

Valerie, Helen and Cynthia will hit the road from 28th January in Chatham and continue through another twenty or so towns and cities, including Aberdeen (2nd Feb), Birmingham (9th), London's Indigo2 (10th) and, er, Barnstaple (15th), before touching down at the Floral Hall in the Wirral on 27th Feb. Tickets are on sale for most of the venues already, priced from around £12.50 plus fees. Check below for the full list of towns.