Waiting for a miracle? The Comsat Angels return to steeltown for December 2010 exclusive 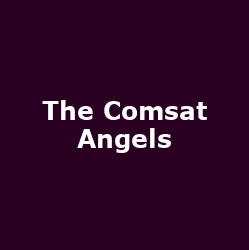 They came from Sheffield, they evaded the attentions of radio playlists (presumably by making the mistake of knocking out decent music) and they batted in the same field as The Cure, The Sound and Modern English in their darker states. Their sound was often bleak, until they were bitten with the same MOR bug that crippled Simple Minds in later years but, right up until their departure from Polydor to Jive, they released some rather sparkling singles in "Total War", "It's History", "Eye Of The Lens" and perhaps their signature song, "Independence Day", which saw a re-release on their new label in 1984.

For fans of the band, old or young, a live reunion date is surely big news. Their chosen venue is in Sheffield (where else?) and will take place on 11th December at the city's Plug venue. Tickets are on sale now and cost Â£17.50.

It remains to be seen whether the band have any new material up their sleeves - their last album came out in 2007, a double-set of demos and rarities from their original inception in the 80s and 90s.