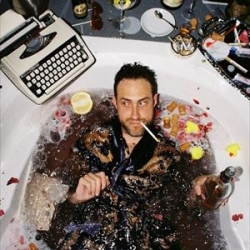 Respected for his beat-boxing skills and acclaimed by the hip and happening BBC Breakfast programme as 'The King of Sound and Ruler of Beats', Beardyman is an unlikely candidate for his new royal title, but the man is a becoming a bit of a 'ledge' in his own rhyme-time.

Able to emulate a huge catalogue of sounds, his obvious forte is turning his chops into a drum-machine, turntable and sound-effects chamber all at the same time, winning the UK Beatbox Championship in 2006/2007. Using the most minimal of looping software, he can bring himself to the party without a DJ box (that must save a lot of money and backache), as displayed at his Battlejam shows (the Brighton night in May is worth watching on his webpage).

He embarks on a UK jaunt in October/November, called the 'Where Are You Taking Me?' tour. The first date is back to Brighton on 14th October with more confirmed for Cardiff, Nottingham, Manchester and many more until finishing in London at the Electric Ballroom on 4th November. Most tickets are under a tenner and available right now - certainly worth every penny I reckon.