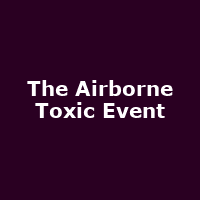 Alt-rock outfits, eh? Bleedin' loads of 'em everywhere. However, some are definitely worth their salt and The Airborne Toxic Event are certainly one of them - have a listen to their big single, "Sometime Around Midnight" and you'll see what I mean: big grandiose arrangements, smooth almost-baritone vocals and a tale of unrequited love - we could almost be talking about The National. However, the rest of their songs are slightly less introspective, such as "Wishing Well" and "Gasoline" from the debut self-titled album released in 2009.

Much of their word-of-mouth popularity has been through their acoustic re-readings of their songs, many of which have been posted up on My Space. If you fancy seeing the real thing, the Californians have announced details of a few UK dates, split into two types.

The first trio of dates takes place in October at Edinburgh's Pleasance Theatre on the 1st, followed by Manchester (2nd) and the Union Chapel in London (3rd) - tickets are on sale now at Â£17.75. The fourth gig takes place in Cardiff on 4th October and will feature a full band-performance - tickets for this date cost Â£11.

The band are currently in the studio working on their second studio album, due for release in early 2011 - I reckon you may hear a few newies throughout the evenings above.