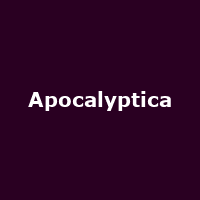 You may remember this quartet of Scandanavian leather-clad cellists (and drummer) from their debut-album "Plays Metallica by Four Cellos", a Top 10 success in their home-country of Finland in 1996. Much was made of the unique yet respectful readings of "Master Of Puppets", "Enter Sandman" and "Creeping Death", and they continued the Metallica theme on the follow-up "Inquisition Symphony", as well as covering Pantera and Faith No More tracks.

2010 sees the 'cello-metal' outfit return with the album "7th Symphony" on 23rd August and, once again, features a few guest vocalists in Bush's Gavin Rossdale and Shinedown's Brent Smith, as well as the return of Slayer's Dave Lombardo behind the drum-kit. The album will appear in a limited-edition with a bonus 'live' DVD, featuring concert-performances of tracks from this latest set. Of course, you might prefer to see them live....

They will play just three dates in November, starting at London's HMV Forum on the 2nd, Glasgow on the 3rd and Wolverhampton on the 4th. Tickets go on sale at 9am this Friday, priced at Â£15 - Â£17.50. After 15 years of recording you can expect much interest in these gigs.