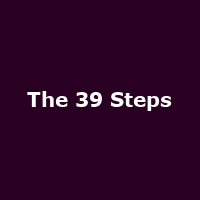 Written as a novel by John Buchan and adapted into an exciting film by Alfred Hitchcock, the wartime spy-drama "The 39 Steps" is currently running at the West End's Criterion Theatre. Due to its enormous success, this award-winning comedy adaptation by Patrick Barlow has now had its run extended well into next year with new tickets just recently announced. The play will now continue until October 2011 with the current cast provisionally staying in their roles, including David Bark-Jones as the heroic Richard Hannay.

Without giving too much of the plot away, Hannay discovers the body of an undercover spy in the First World War, whose job it was to follow the movements of a German spy-ring who are seemingly hell-bent on assassinating a Greek figurehead and steal British tactical plans. Hannay opts to continue the dead spy's hard work and 'save the day'. This tongue-in-cheek adaptation stars just a quartet of actors all assuming well over a 100 roles between them, creating a frenetic fast-paced and hilarious production that won the Olivier Comedy Award in 2007.

Tickets are still available from Â£12.50 for upper circle seats on some dates during August 2010, rising to Â£45 for best seats. Some complete performances are sold out, however.