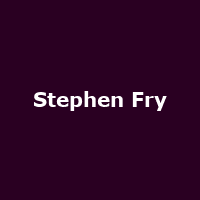 Back in May, we reported on a certain Stephen Fry appearing live in Oxford for an evening of memoirs and excerpts from his upcoming autobiography - it's in Oxford on 18th September and there are still a limited amount of balcony seats left for £25.

In addition to the 'dreaming spires' event, there is also the small matter of a date at the Royal Festival Hall in London, this time on the 13th September - But there aren't any seats left for that one I'm afraid.

Thankfully Mr Fry has not taken leave of his senses by announcing another huge London date, this time at the Royal Albert Hall on 20th September. Tickets will go on sale tomorrow morning, starting at £30 for circle seats, rising to £55 for arena, stalls, loggia or grand tier seats. If this sells out as quickly, there is the odd chance there might well be a Stephen Fry Festival, staged over 10 days using the entire county of Kent. I'm being flippant of course, but Fry is always big news and the forthcoming "Fry Chronicles" is surely set to become the Christmas best-seller upon its release, due to be October.