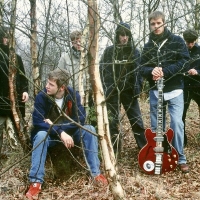 The Coral have marked their 14th year in existence with another hit-album and a new UK tour. Their "Butterfly House" set reached number 16 upon release, making it a magnificent seven-in-a-row, their first being the self-titled album in 2002 which contained the first of many much-loved songs including "Goodbye" and "Dreaming Of You". It was the follow-up that really set them on their way - "Magic and Medicine" reached number 1 and garnered a decent following across much of Europe.

But it's the UK where they are better-known, hence five dates this autumn. The lads will play some festivals first, including Kendal Calling (this weekend), V Festival and Summer Madness (with Paul Weller), before embarking on gigs in Leeds on 14th November, London's Royal Albert Hall (15th), Oxford (17th), Glasgow (19th) and finally it's back home to Liverpool (20th). Tickets are on sale now, priced at £18.50 upwards.

Meanwhile, check out the new album - it's a rather swoony, summery thing.