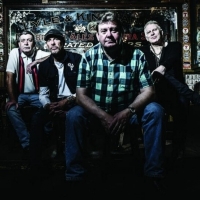 If the rumours on their website are anything to go by, it finally looks as though Belfast's fiery punks, Stiff Little Fingers are on the home straight with their upcoming new album. Currently still untitled, a few new songs have been given the live treatment on previous dates, including "One Man Island" and "Liars Club", but the likelihood of the album actually appearing a few years after its original incarnation was binned by front-man Jake Burns, is becoming increasingly likely.

It will be their first set of new songs since 2003's "Flags and Emblems" and will obviously demand a bit of the old live airing in order to tempt you to buy it. Their first pair of dates are in August as part of two festivals, the full-on punk and hardcore Rebellion in Blackpool on 6th August (also starring Bad Religion, Gallows, Subhumans, Goldblade, New York Dolls and dozens more - £38.50 for a day ticket) and Dunfermline's Fifefest on 7th August.

The band will then embark on a pair of Northern England gigs in October beginning in Buckley, Flint on the 9th and Holmfirth on the 20th. Both dates are up for sale now and cost £16 plus fees. Keep checking back for further additional nights - I'm sure the legendary providers of anthems such as "Suspect Device", "Nobody's Hero", "Alternative Ulster" and "Listen" are due a visit down south sometime soon.