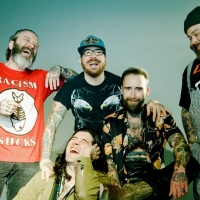 They're loud, intense, just a tiny bit angry and, did I mention that they were loud? I believe I did, but they also write songs, unlike many other so-called 'melodic hard-core' outfits from across the pond (actually, they hail from Canada). Yep, Alexisonfire ain't too shabby and have been around for 10 years or so now, racking up acclaim for their albums so far, from the self-titled debut in 2001, right up until the 2009 set, "Old Crows / Young Cardinals".

The hardcore boys have announced the release of an EP in the autumn, entitled "Dog's Blood" with the possibility of a longer album due in the New Year. So, as part of a short hiatus from their other projects such as F*cked Up and Black Lungs, the band are hitting the UK in the autumn as well.

Their opening gig is in Cardiff on 4th November and continues on for a total of seven dates including London on the 11th and the last date in Nottingham on the 12th. Tickets go on sale on Wednesday 4th August at 9am, priced at £14 - £15. You can't say you haven't had good notice for these babies! I'm still wondering what possessed them to name themselves after (ahem) "the only lactating contortionist stripper, Alexis Fire". Who cares - you play with Alexisonfire, you gonna git burned.